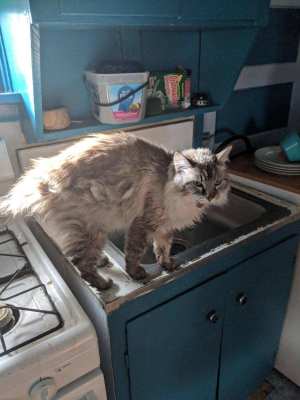 Sandra L. “Sandy” Crane, age 57, of Watertown, SD, passed away on Thursday, August 1, 2019, at her residence. Funeral services will be at 1:00 p.m. on Thursday, August 8, 2019, at Crawford-Osthus Funeral Chapel. Rev. Carl Van Voorst will officiate. The family is requested to meet at the chapel by 12:30 p.m. for a family prayer service.

Visitation will be at Crawford-Osthus Funeral Chapel on Wednesday from 4-7 p.m. and prior to the service on Thursday at the chapel.

Honorary pallbearers will be all of her cats.

Sandy was born on June 2, 1962, to Alvin and Donna (Tracy) Funge, in Tea, SD. She was a graduate of Lincoln High School in Sioux Falls, SD. On August 16, 1991, Sandy was united in marriage to Joseph Crane. The couple lived in Sioux Falls before moving to Watertown in 1993. To this union two children were born, Kevin and Melissa. Sandy was a homemaker and never worked outside of the home.

She liked to keep to herself, collecting unicorns, cats and wolves. Sandy liked watching horror movies and the Dallas Cowboys.

She was preceded in death by her parents; her sister, Mary Jo; and several nieces and nephews.

To send flowers to the family or plant a tree in memory of Sandra L. Crane, please visit our floral store.