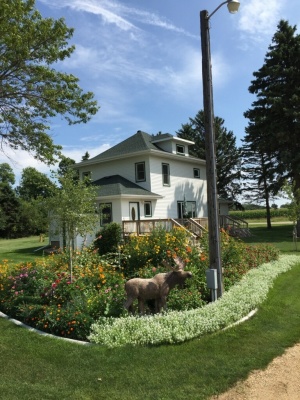 Lawrence “Larry” E. Mack, age 79, of Watertown, SD, formerly of Fargo, ND, passed away on Thursday, June 6, 2019, at his residence and was welcomed into the loving arms of his Heavenly Father and eternal home.  Mass of Christian burial will be concelebrated by Father Michael Wensing and Father John Lantsberger at 10:30 a.m. on Friday, June 14, 2019 at Holy Name of Jesus Catholic Church in Watertown. Music will be provided by Donna Williams as organist and Blaine Martian as song leader. Lector will be Charles Hermansen. The family is requested to meet at the church on Friday by 10:00 a.m. for a prayer service.

Visitation will be Thursday, June 13, 2019 from 5-7 p.m. with a 7:00 p.m. Scripture Wake Service, led by Father John Lantsberger, at Crawford-Osthus Funeral Chapel.

Lawrence “Larry” Edward Mack, first-born son of Joseph N. and Eleanore A. (Fox) Mack, was born January 27, 1940.  He joined his big sister on the family farmstead and later welcomed four brothers and one more sister to complete the family.  As a boy growing up in the country northeast of Watertown, Lawrence loved everything about the farming operation, from planting grains to harvesting, hauling and stacking bales, and caring for all the varieties of animals.  He was a longtime 4-H and FFA member while he attended Immaculate Conception School and Watertown High School, graduating with the class of 1958.  His severe asthma kept him from pursuing farming as a lifetime vocation, but his passion for agriculture directed him to South Dakota State University, where he earned a bachelor’s degree in Agricultural Economics.  He continued his education with both a masters and doctoral degree at the University of Arizona in Tucson.  He was an avid reader of Wall Street Journal, Minneapolis Tribune and Watertown Public Opinion.  Lawrence became a professor in his field and taught at the University of Arizona, Colorado State in Fort Collins, and finished his career after teaching 33 years at North Dakota State University. Dr. Lawrence “Larry” Mack joined the faculty of the North Dakota State University Department of Agricultural Economics (now called Agribusiness and Applied Economics) in January, 1979. He was a devoted professor who loved teaching classes in his specialty areas of farm management and agricultural finance. Larry also taught principles of economics classes to thousands of students during his 33 year career at NDSU. He served as an academic advisor to hundreds of Agricultural Economics and Agribusiness students, who continue to comment about his excellent mentoring that contributed to their success. He was also a trusted advisor to the student Agribusiness Club. Larry retired from NDSU in July 2012, and returned to his cherished childhood farm home in Watertown.

He was preceded in death by his parents; infant sister, Teresa Ann; youngest brother, Gene Mack; and one nephew.

To send flowers to the family or plant a tree in memory of Lawrence "Larry" E. Mack, please visit our floral store.